As you may remember, last weekend was ARRL Field day, and as you may remember I have stated that I was participating with the Antietam Radio Association with their Field Day activities in Leitersburg, Maryland. 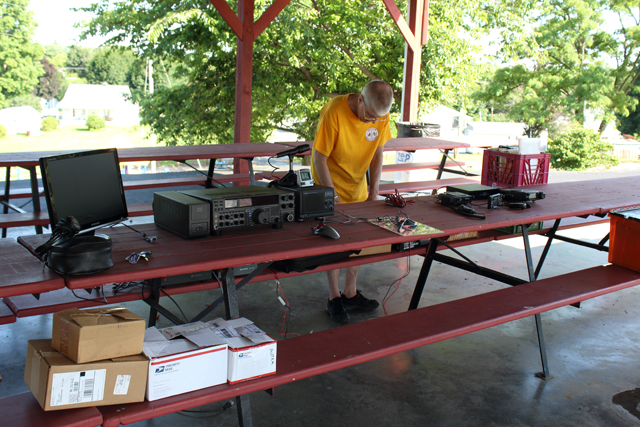 Here our 20 meter phone and all band digital station is being set up in the pavilion. Also shown is a spare radio, which while we needed it, we actually did not push into service. 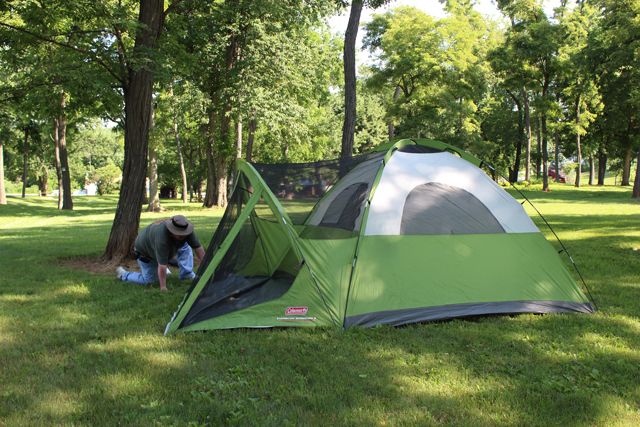 Here the tent for the 40 meter phone station is being set up. 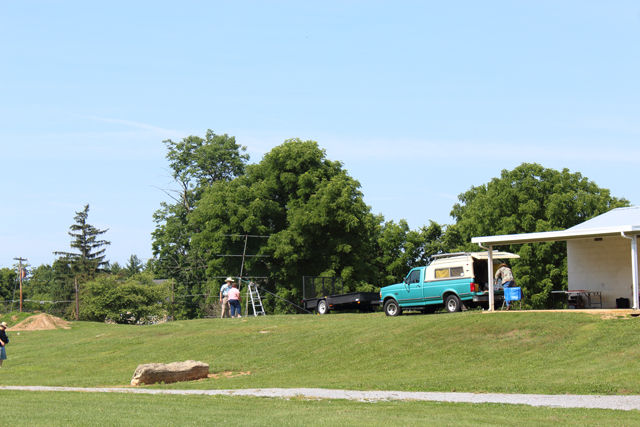 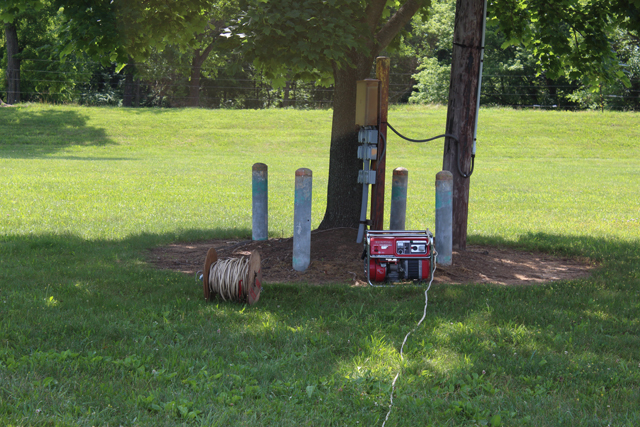 As usual we operated using emergency power throughout field day with the exception of those contacts made using solar power. 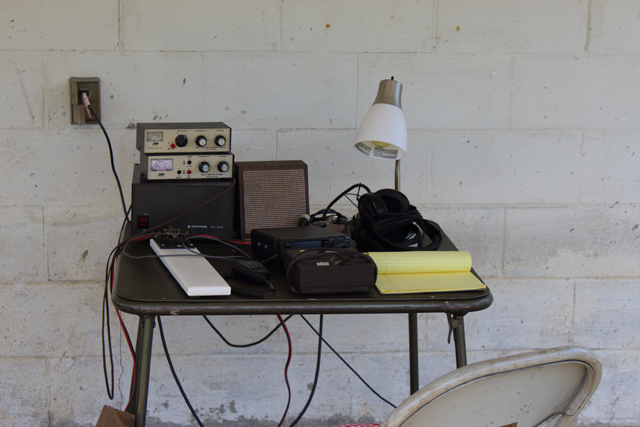 The VHF station, almost complete, commercial power was used for testing purposes only. 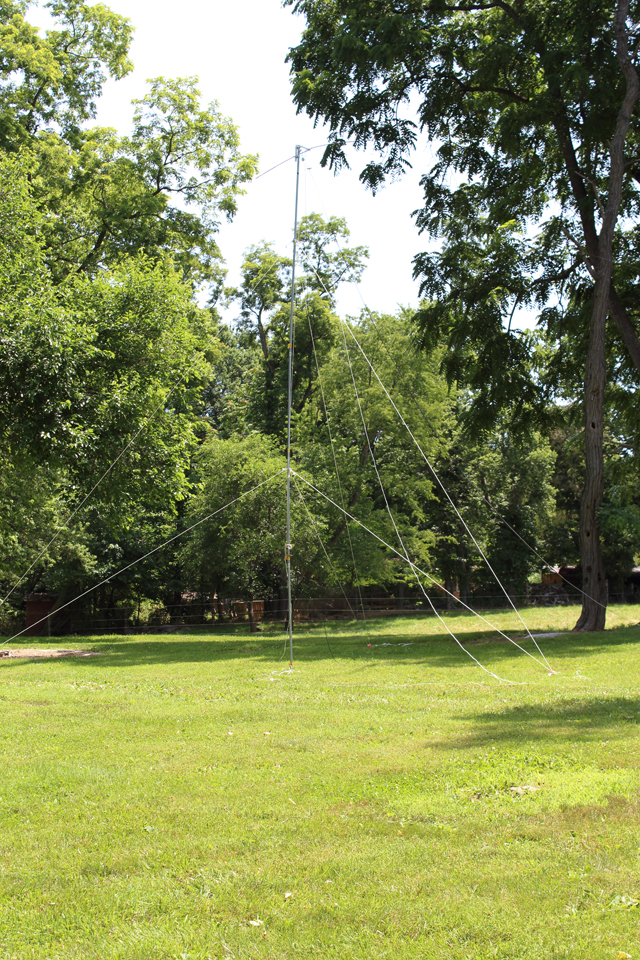 One of the many antennas used was a set of 40 meter hamstick antennas back to back on a mast. 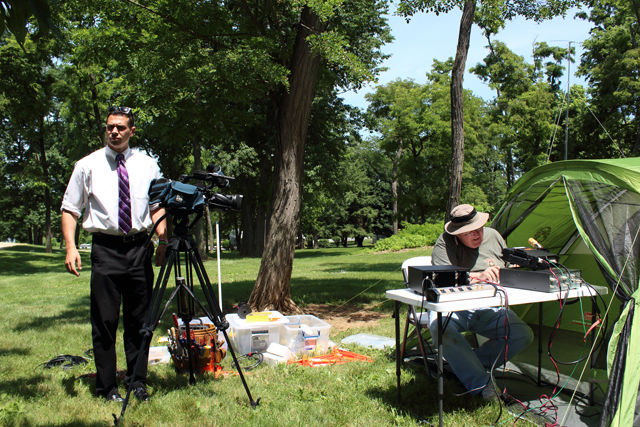 The local TV station came out to check out what we were doing. Here they are preparing to film a pre-field day contact which later made the final story. 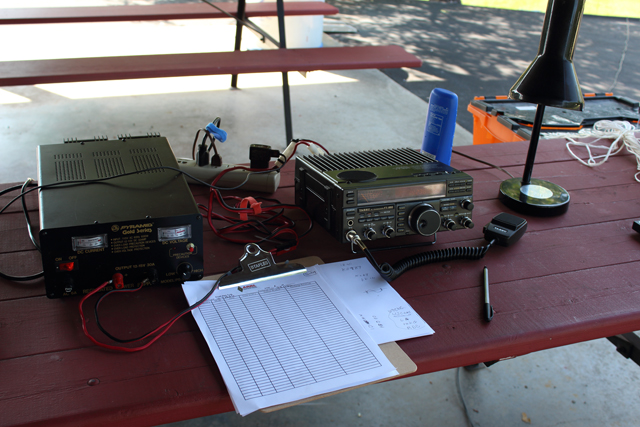 Our get on the air (GOTA) station is almost set up. Getting close to starting time here. Generators were started shortly afterward. 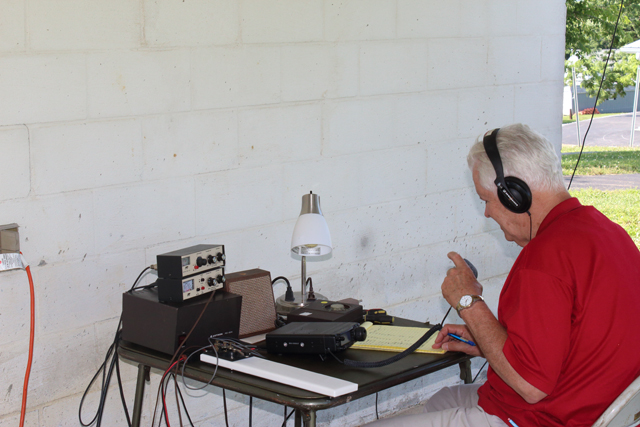 Here is the VHF station operating on solar power making field day contacts. Nothing is connected to the extension cord connected to commercial power. 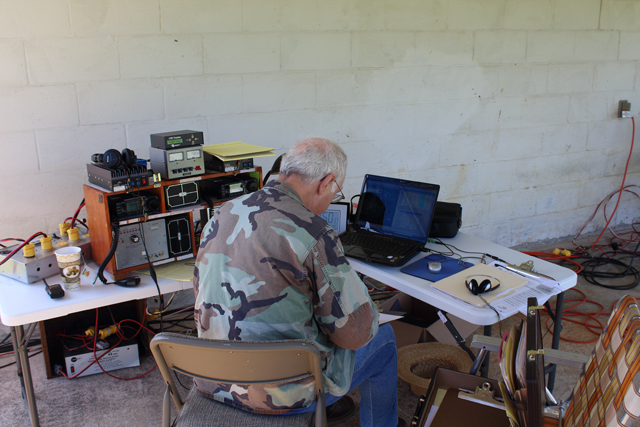 Here is our satellite station waiting for the first field day pass. The computer you see is tracking the satellites using satellite tracking software (which works offline) and controlling the antenna rotor. The radios are controlled manually. 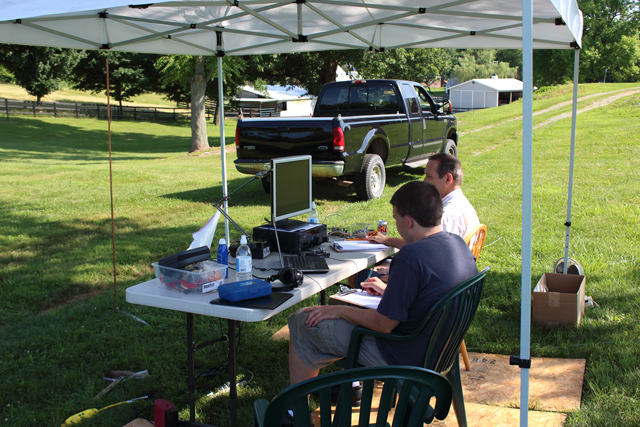 Here we have our CW station making contacts. We don't have many operators that specialize in CW contacts, but we do have a CW station. 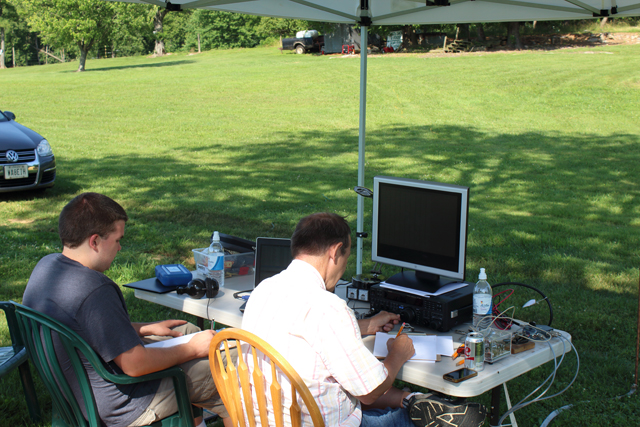 While just another view of our CW station, this brings the computer into view. Our CW station this year also was testing computer logging. 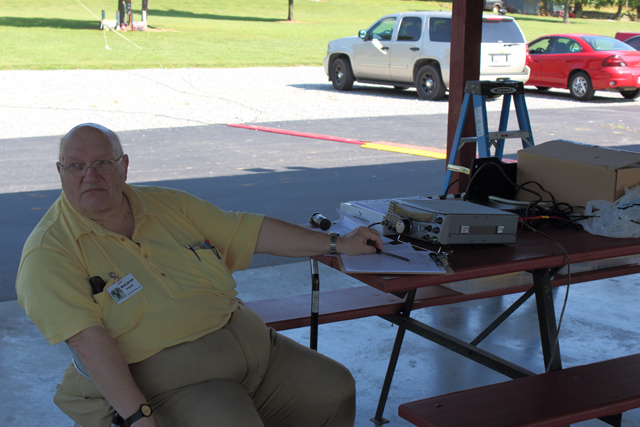 While not in operation during this shot, we have our 75 station and operator being shown. The radio here is owned by the county emergency management agency and is being loaned out for testing purposes. We had two of the units, one (not shown) was inoperable. 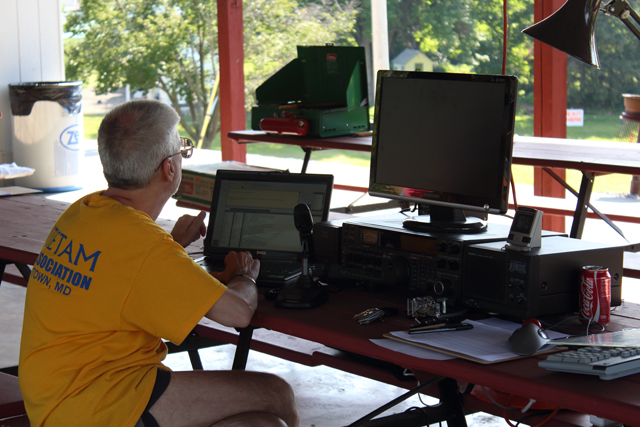 Here we have our 20 meter phone and all band digital station in operation. It appears at this point that digital contacts were being attempted here. 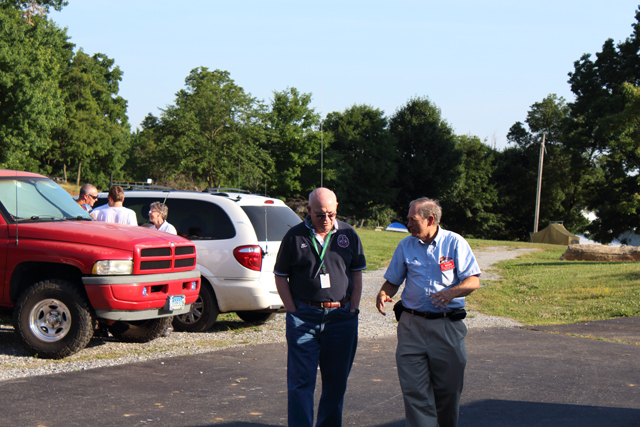 As happens many years we get a visit from our ARRL section manager (right). This time he and his crew came in around dinner time. 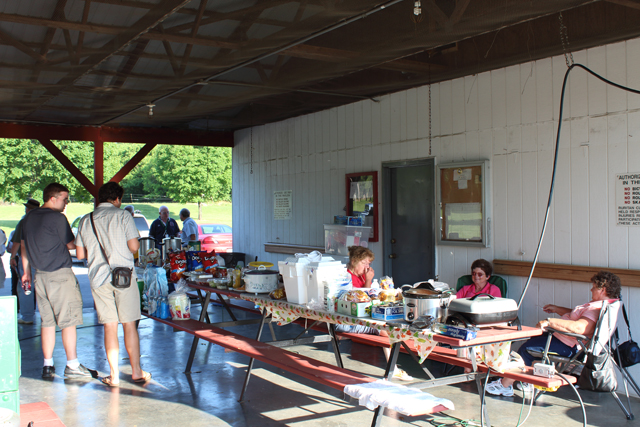 Speaking of dinner. We had a LOT of food this year. We had many things including fried chicken from a local convenience store chain. 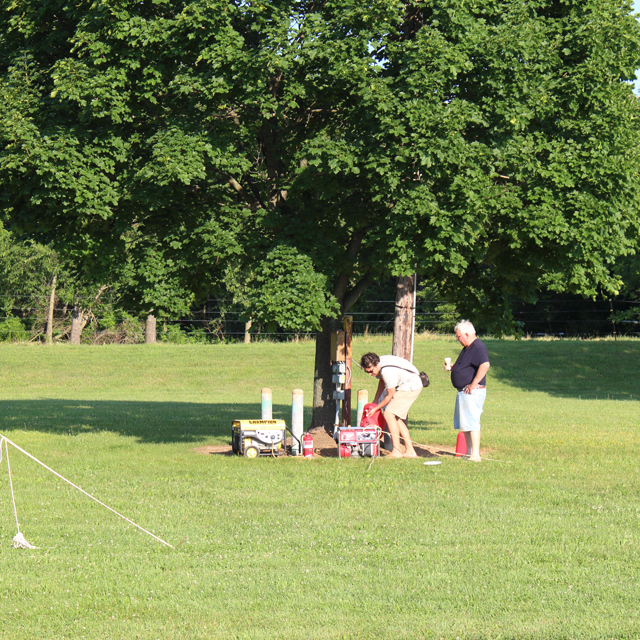 After a few hours the generator powering the pavilion needed refueled. Also shown is another generator that was probably used on Sunday. The fire extinguisher was later moved so that it would be usable in case of a fire. 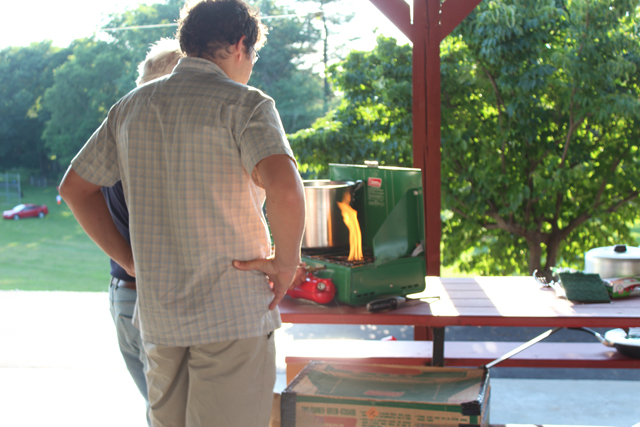 Cooking was done using crock pots (on commercial power) and using a camp stove. The camp stove is pictured during startup. 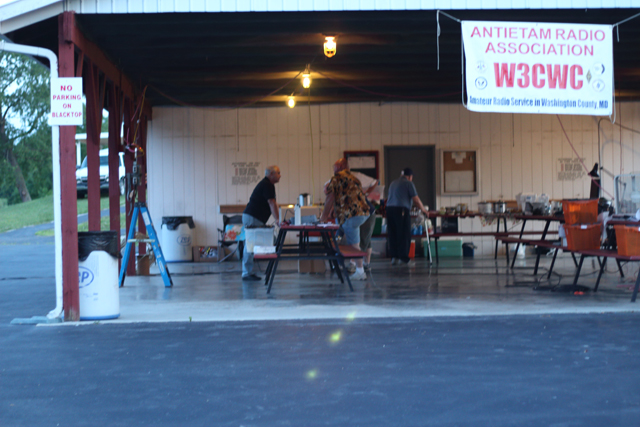 The sun is getting ready to set and the pavilion lights are powered on using commercial power. We are getting ready for the night shift. 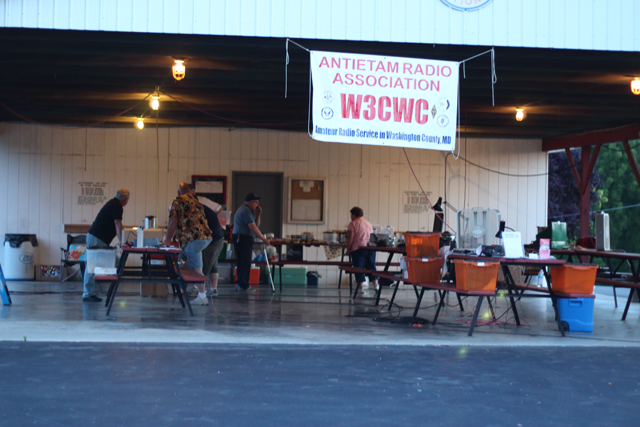 Still preparing for the night shift. Very little operating was going on at this time. 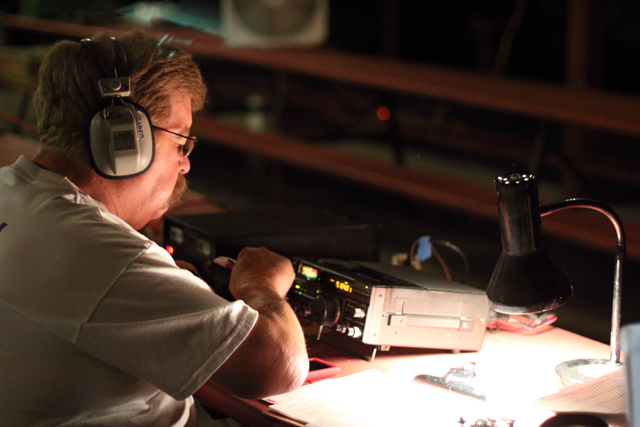 And of course the night shift has arrived. Since it was unlikely that any proper GOTA operation was to occur overnight the GOTA Station was re-purposed as a normal station to cover for the station that did not even make it to air. A tip for the photographers, this picture was taken without flash.


I went to bed at about 0100 local on Sunday morning and got back up for a while. I then slept a little longer, but left at around 0630 local. Due to trouble sleeping on site, next year, I am considering leaving at around 0100 hours to go home and returning at around 0600 hours to finish out field day before going home for a nap.
Posted by kb3pxr at 19:29

Please post helpful information, notify me of any errors and/or misinformation in this post, or provide feedback. Please be advised that comment moderation has been enabled to fight spam, please be patient for me to approve your comment.